Like all the four limited editions, this Hi-beat 36000 has a dial in Grand Seiko’s signature blue

In the late 1950’s, a small team of Seiko’s finest watchmakers came together with a very simple yet ambitious aim. It was to create the very best watch of which they were capable, with the highest possible levels of precision, legibility, durability and ease of use. In December 1960, their first creation was born and, in keeping with the team’s ambition and desire to create the “king” of watches, it was named Grand Seiko. It had a level of accuracy equivalent to the superior grade of the recognized chronometer standard at the time and it marked the first step on a sixty year journey towards the summit of the watchmaking art.

2020 marks the 60th anniversary of this achievement. Of course, the number sixty is one of the most fundamental numbers in horology, but, in Japan, it has an additional significance as a moment of new energy and re-birth. Today, to begin a full year of celebrations of this important landmark, four new timepieces are released that both celebrate the first sixty years of achievement and point the way forward to the next sixty year cycle of Grand Seiko’s life. All four of the new creations have dials in Grand Seiko’s signature blue color but each one exemplifies a very different aspect of the wide range of expertise and craftsmanship that Grand Seiko commands today. A new Hi-beat 36000 creation from the Heritage Collection
The 60th anniversary celebration starts with two automatic watches that are unmistakably and quintessentially Grand Seiko. The men’s watch pays homage to the famous 44GS from 1967 whose design was the first ever expression of the uniquely Japanese Grand Seiko Style which, ever since, has been its visual signature. It features the high beat Caliber 9S85 which delivers an accuracy of +5 to -3 seconds a day and a 55 hour power reserve. In honor of the 60th anniversary, the Grand Seiko symbol is in gold and the seconds hand is in a vivid red, colors that, together, symbolize a sunrise and all the new energy that a new dawn brings. Diamonds, mother-of-pearl and a slim profile

The women’s automatic watch is powered by Caliber 9S27, an automatic movement specifically designed for Grand Seiko’s women’s collection. It delivers a perfect balance of precision (+8 to -3 seconds a day), power reserve (50 hours) and slimness. It has a mother of pearl dial in, of course, Grand Seiko blue and has diamonds as hour markers and which is framed on its bezel with 45 diamonds. After all, it is a diamond anniversary. Both creations will be available in February 2020 as limited editions; 1,500 for the men’s watch and 300 for the women’s. The 60th anniversary is also celebrated with a new quartz movement. Caliber 9F85 has a time difference adjustment function that allows the hour hand to be adjusted without stopping the seconds hand and thus preserving its high precision when the wearer changes time zones. This new caliber makes its debut in two 60th anniversary designs. The first has a version of Caliber 9F85 that is specially adjusted to a level of accuracy of ±5 seconds a year. This high precision is marked by the five pointed star at the six o’clock position. The dial, too, has a unique marking with a 2020 pattern, reminding the wearer of this special year. The case design is modern in its execution. Its bezel is thin which allows the dial to be wider and therefore more legible. The case side has a sharp curve so that more light reflects off it and adds to the “sparkle of quality” that is an essential part of the Grand Seiko Style. The seconds hand of this timepiece is also in a vivid red. It will be available in March 2020 as a limited edition of 2,500.

A sports design with a ceramic bezel
The second watch to have the new quartz caliber joins the Sport Collection. In addition to the Grand Seiko blue dial, it features a ceramic bezel of the same color that is almost impervious to scratches. The markers as well as the hour and minute hands are coated with LumiBrite so as to increase the legibility of the time even in low light conditions. It has 20 bar water resistance, magnetic resistance of 16,000 A/m and a screw-down crown for enhanced security. It will be available in April 2020 as a limited edition of 2,000. 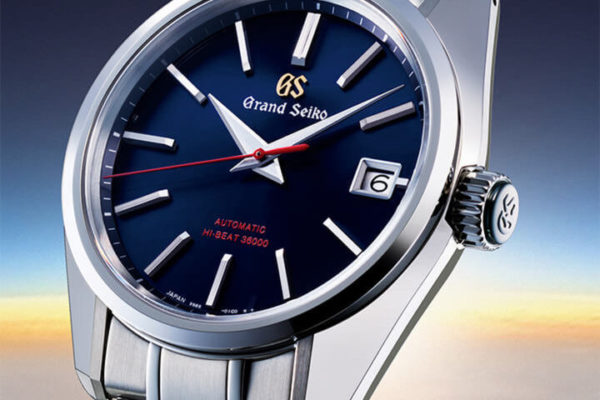