October 22nd, 2020
Geneva, October 20, 2020
The collection of UR-220 watches has taken off. The initial version in carbon has now been joined by a new model the UR-220 All Black. URWERK is exploring all the shades of its lucky colour. Black will always be black, but it comes in many textures. 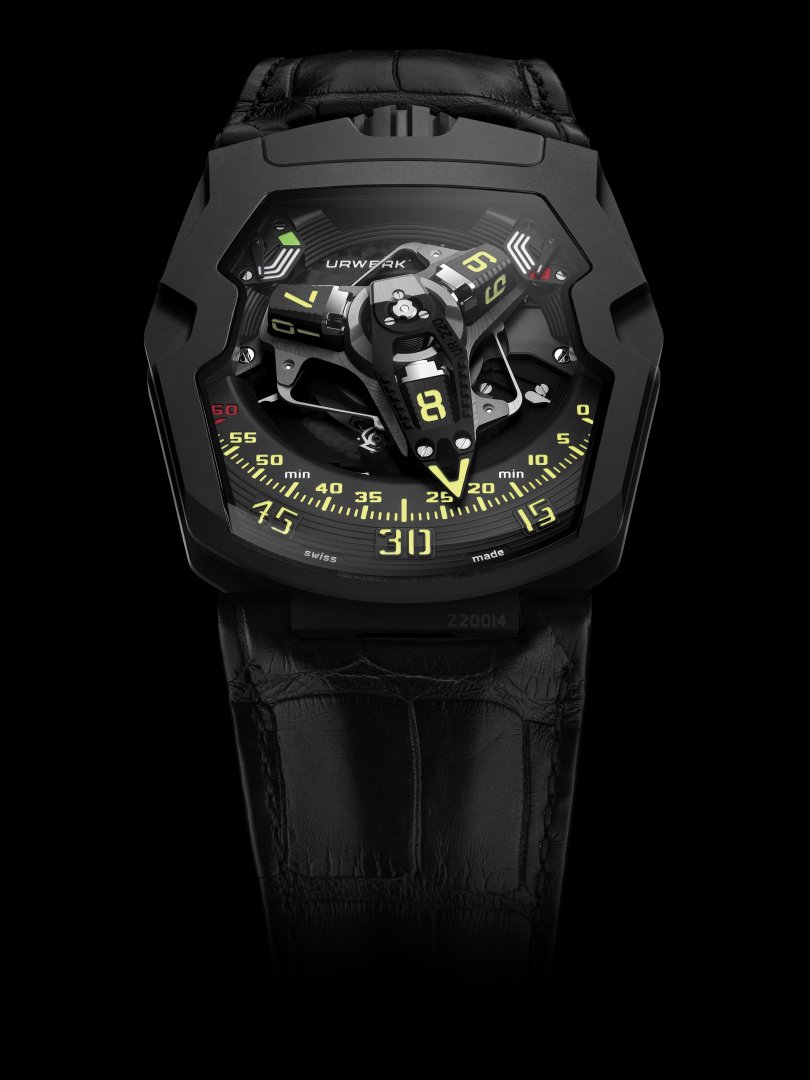 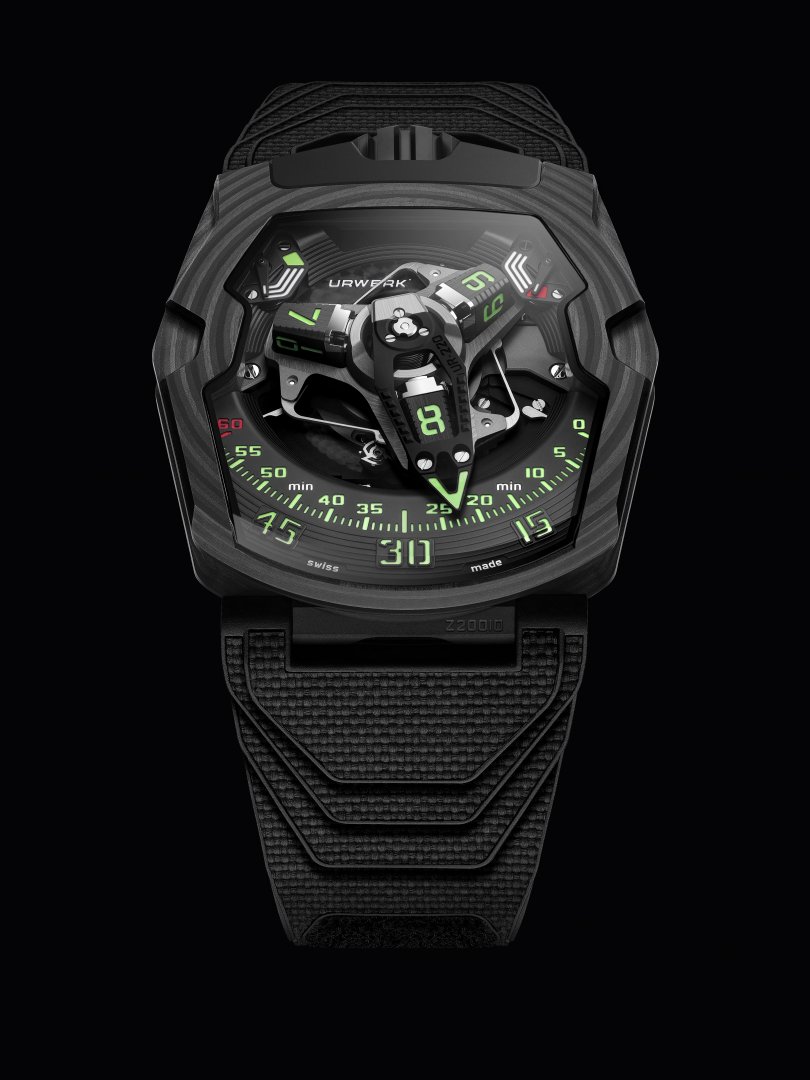 With these two watches you can have any colour you like, so long as it’s black. One is made of carbon in patterns reminiscent of crop circles; the other is in a deep, intense black. Both are from the URWERK workshops and belong to the new UR-220 collection.
The UR-220 All Black version is made of titanium and steel. The carbon UR-220 is the first URWERK model in this material and was unveiled last September. Its case, built up in 81 layers of carbon, is unmistakeable.
The main difference between them lies in their weight. The carbon watch, on an avant garde rubber strap, weighs 25% less than the All Black version, which has a more traditional leather strap. Both watches are built with the same care and attention to detail expected of URWERK’s watchmaking.
“The UR 220 is above all a natural progression from our UR-210 model,” explains Martin Frei, the designer of URWERK’s watches and co founder of the company. “ It meant th e death of the UR-210 so that it could be resurrected in a new guise. The differences are subtle but noticeable to the practiced
On the instrument panel
In a break with tradition, we’ll start with the back of the watch home to a feature unprecedented and unique in watchmaking URWERK’s oil change indicator. After an absence of some years, this complication returns to tell you for how long the movement has been running and when it is time to lubricate and service the machinery. Originally in the UR-110 models, the oil change indicator has undergone significant improvements. In the UR-220 the number of months the movement has been running is shown on two side by side rollers. The wearer of the watch starts the count by removing a locking pin and pressing the button on the back of the watch. When the rollers show that the movement has been running for 39 months, it’s time to have the watch serviced. URWERK’s technicians will reset the counter to zero and replace the locking pin. 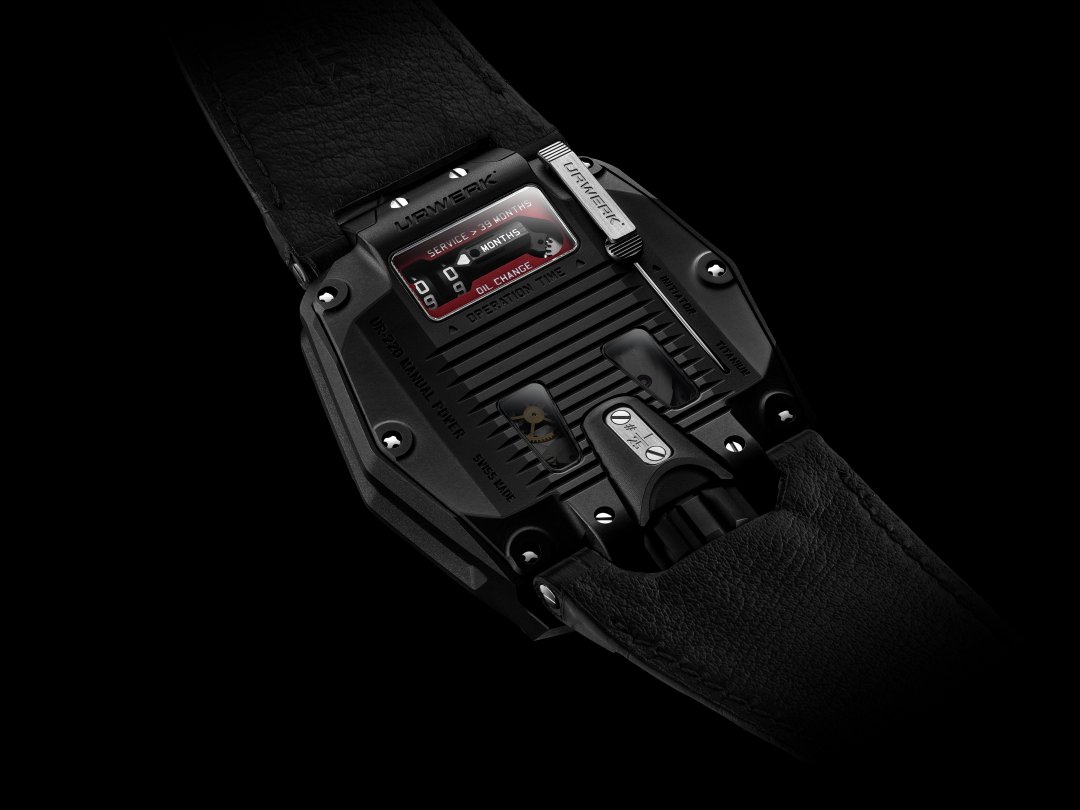 Felix Baumgartner, URWERK’s other co-founder puts the idea into context: “It’s more than just a numerical counter, but an additional connection with your watch. The oil change indicator is witness to the time your watch has spent on your wrist. It’s also a visible record of the energy you have put into the movement by winding it regularly.”
Riding the carousel
The UR-220 adopts its predecessor’s satellite wandering hours, patented by URWERK. The hours are grouped in fours on three rotating cubes at the end of the carousel arms. In turn they pick up a hollow minutes pointer and carry it across the 120° arc of the minutes scale. At the 60th minute, the pointer flashes back to zero, to be picked up by the next hour. To reduce inertia and increase the speed, the surfaces of the minutes pointer have been pierced. This must be the most sophisticated retrograde minutes indication in any watch. 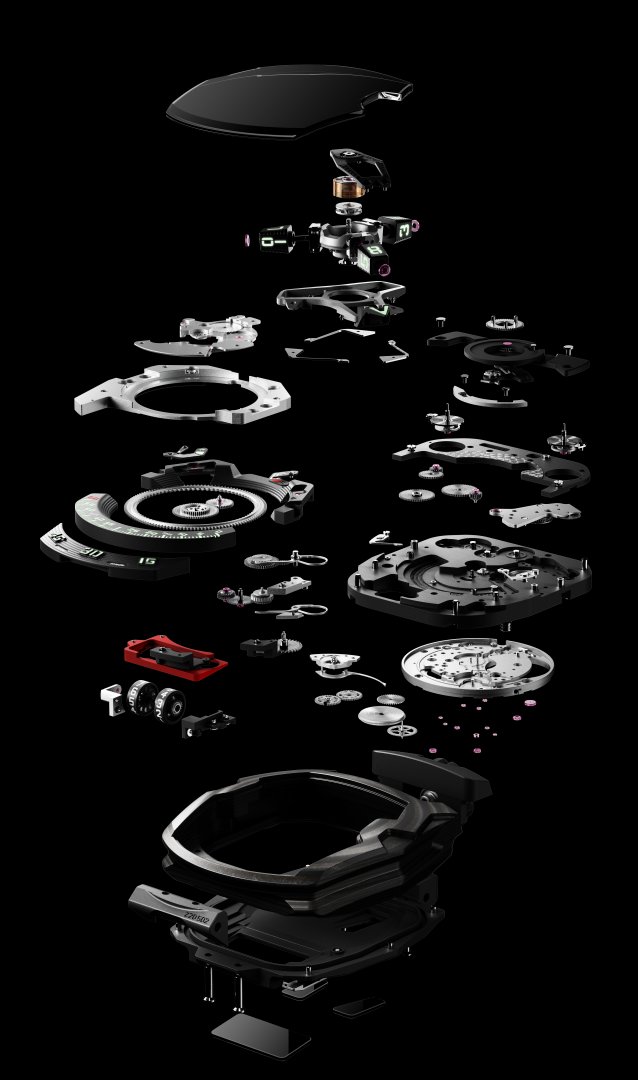 The smallest detail
No detail can be neglected, especially not the numerals of the UR-220. Martin Frei has designed a new typography making the hours and minutes even sharper. They find their inspiration in the graphics of contemporary video science fiction games.