URWERK Presents The UR-220 SL “Asimov”

LIGHTS IN THE NIGHT

Night finally enfolds the city. It is at this precise moment that the UR-220 SL Asimov comes to luminous life. A UR-220 model whose hours satellites glow as they gently emit the light stored up during the day. A fluorescence that accompanies the counting of the hours and renders it visible. Like phosphorescent photons, moulded Super-LumiNova® satellites enliven the baseplate of the UR-220 SL Asimov, giving light to the night. Someone clawed at the torch, and it

fell and snuffed out. In the instant, the

awful splendor of the indifferent Stars

leaped nearer to them.

On the horizon outside the window, in

the direction of Saro City, a crimson glow

brightness, that was not the glow of a sun.

The long night had come again.

Stealth spaceship by day, luminescent installation by night, the UR-220 SL Asimov is the third variation of the 220 collection. Under the impetus of designer and URWERK co-founder Martin Frei, the model has undergone subtle changes in materials, colours, finishes and aesthetic characteristics. Against a predominantly black carbon backdrop, the UR-220 revisits a fascinating play on contrasts and luminosity.

The UR-220 SL Asimov indicates the time by means of luminous truncated pyramid-type hour transporters. The cube shape featured in previous versions of the UR-220 resulted from meticulous work on URWERK’s CNC machines. In this iteration, these elements free of any sharp edges are cast from a silicon mould and hand-adjusted to ensure their perfect finish. Their degree of hardness at the end of the process is close to that of ceramic. This technical expertise was developed by the Swiss company RC Tritec, which has 80 years of experience in the field.

The three hours transporters are therefore “made” of colour, specifically Swiss Super-LumiNova® Grade X1 BL. And it is at night that the transformation takes place, when they become phosphorescent. There is no engraving here, as the satellites and hour-markers are one and the same. They are light catchers, active pigments whose function is to capture each light unit and then restore them in the dark so as to achieve optimal nocturnal legibility. This new display underlines the technical nature of the time reading. It remains based on URWERK’s patented wandering hour satellite complication. The wandering hours are displayed on three rotating truncated pyramid-shaped transporters. Each in turn is inserted into a 3D minutes pointer which travels over the 120 degrees of the minute scale and at the end of the hour makes a big jump back to the “0” marker to welcome the next transporter. This powerful and swift retrograde minutes display is undoubtedly the most impressive ever in a wristwatch, notably featuring a minutes pointer openworked on all sides.

The dial also provides a power-reserve indication that can be read off on two subdials. The autonomy of the movement is indicated by these 24-hour gauges. During manual winding, the right-hand gauge is the first to indicate the mainspring degree of wind and once it has reached the maximum level, the left-hand indicator takes over. Split between two ‘reservoirs’, the power-reserve display is composed of 83 mechanical elements, testifying to the complexity of its development.

The back of the UR-220 SL Asimov features a digital Oil Change gauge appearing on two adjacent rollers. The wearer of the watch triggers this device by removing a protective pin and pressing a pusher to activate the counters that will display the mechanism’s active running time in months. After 39 months – three years and three months – a service is recommended and once this is complete, the URWERK teams reset the counter and replace the pin.

This UR-220 SL Asimov is a quintessential expression of URWERK-ian design construction in which interior and exterior are melded into a coherent whole. The inner or outer shapes, finishes and colours may be merged, shifted or flipped in either direction. The complex shape of the bezel, the slender, hollowed-out lines of the case middle, the strength of the crown at 12 o’clock, are all part of a horological layout exclusive to URWERK. 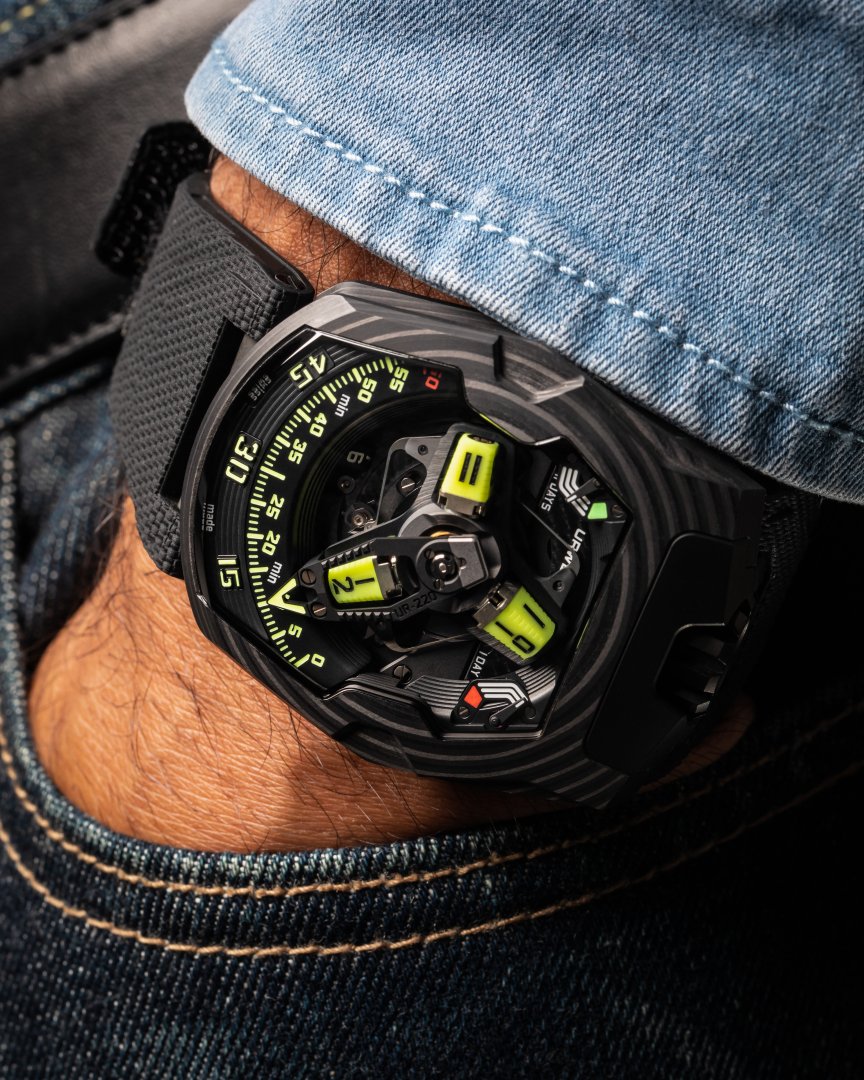